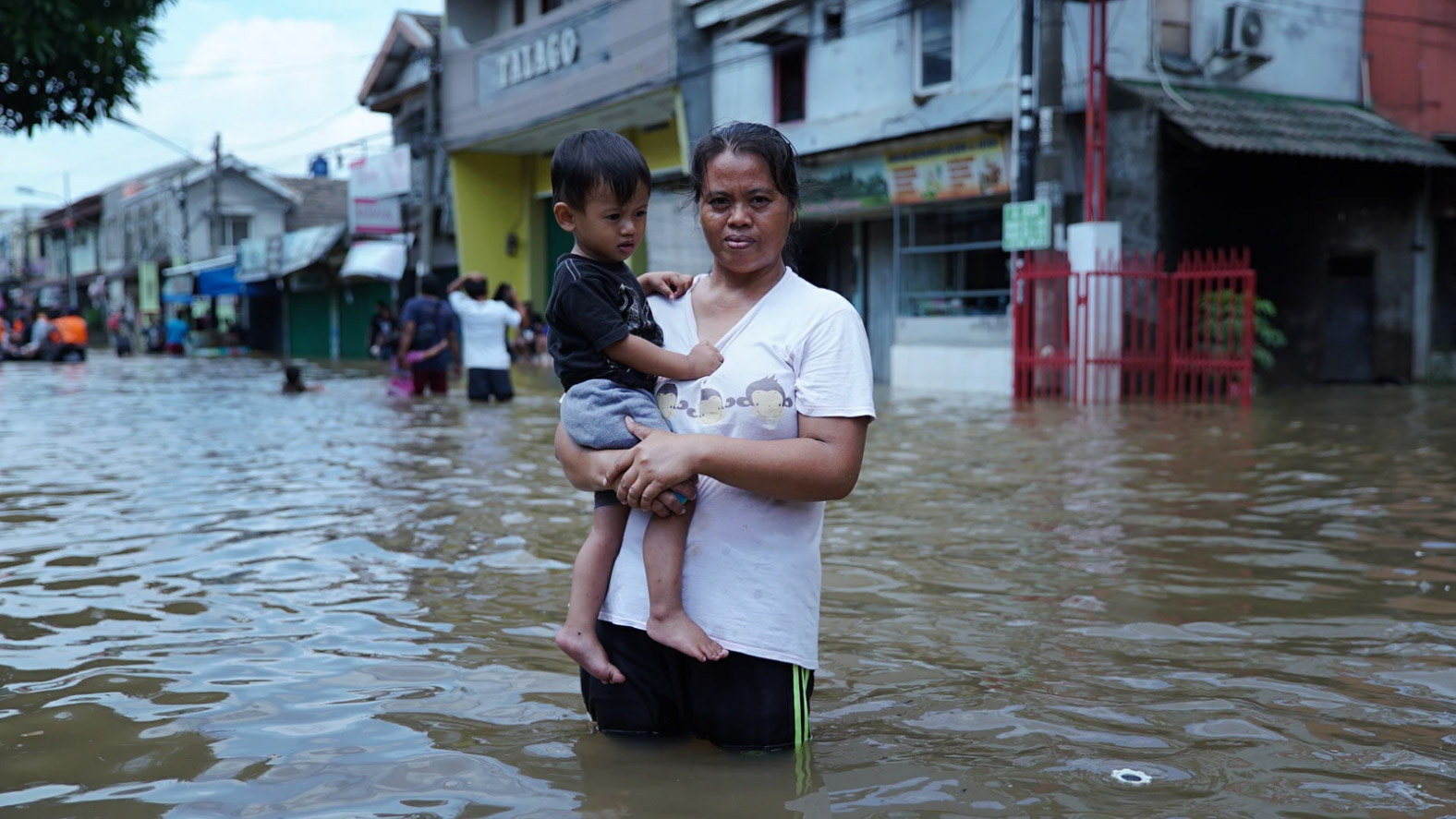 When a heavy downpour fell over Jakarta on December 31 and continued into the new year, Siti Zulaika went about her days as usual. Having lived in a home 6 metres from a river in East Jakarta her entire life, the 37-year-old mother of two is no stranger to the yearly floods that plague the Indonesian capital. But this time was different.

When Zulaika returned home from celebrating the new year, she noticed the nearby Ciliwung river had reached the 5-metre marker that stood on the riverside. By the next morning, the muddy brown water had spilled into the narrow streets surrounding the area.

“As soon as the water hit the 5-metre mark, all residents began safeguarding their belongings,” Zulaikha told VICE. “I moved my things to the second floor. I thought the water would only reach the first floor.”

Zulaikha had miscalculated how much damage the rain would do. At dawn on January 1, the murky water crept into the second storey of her home, leaving them with no safe place to store valuables. She decided to evacuate her family, while some of her neighbours waited on their rooftops for Jakarta’s worst flood in 24 years to recede. 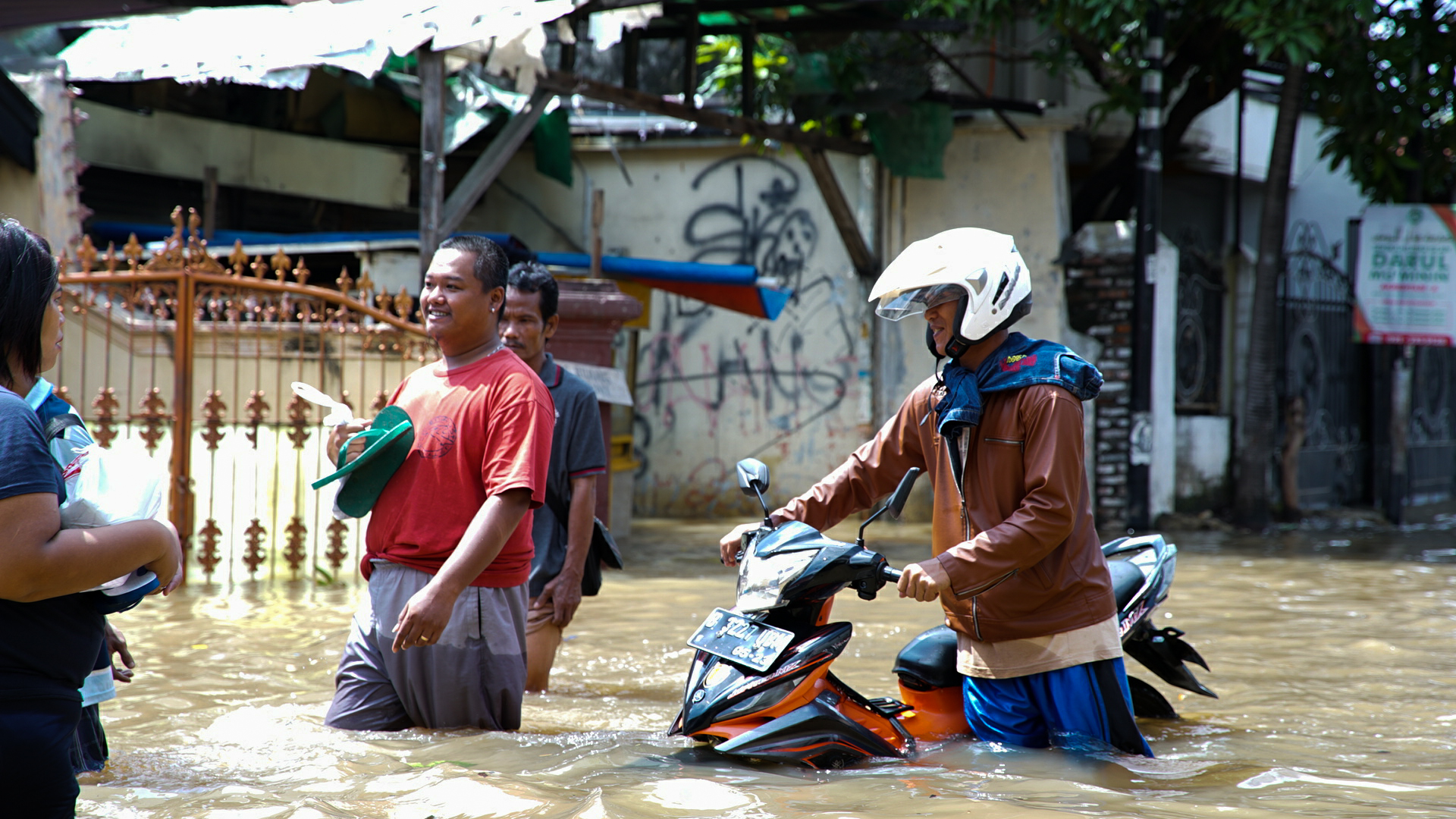 When VICE visited Zulaikha’s neighbourhood, the water had begun to slowly recede, revealing hoards of trash and dense deposits of mud.

Several rivers, including Ciliwung, flow through the Jakarta metropolitan area, and they run the risk of overflowing come the rainy season. In 2015, then-Jakarta Governor Basuki Tjahaja Purnama installed concrete walls along Ciliwung to widen it, which officials believe will prevent overflow. To do so, the city evicted informal settlers living along the river and moved them into permanent housing. But that wasn’t enough.

In the midst of a city budget deficit in November 2019, current governor Anies Baswedan withdrew funds totaling $11.37 million meant for purchasing 118 plots of land along the Ciliwung river. This would have allowed the government to construct more walls along the river to prevent flooding but the project was put to halt. 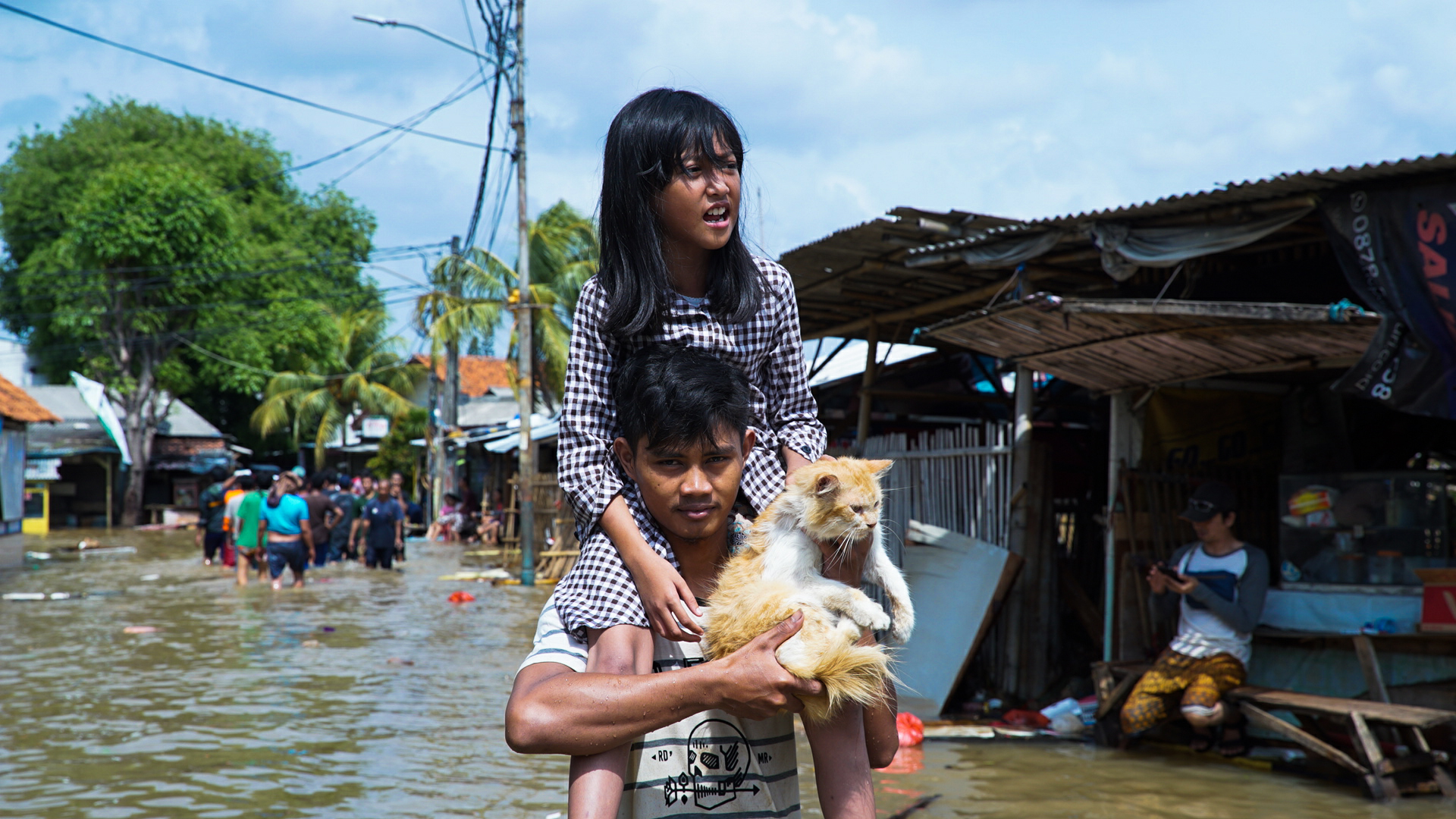 Well into the second day of the new year, much of Jakarta and its surrounding areas was underwater. The neighbouring cities of Tangerang and Banten also experienced severe flooding when the Angke river overflowed. In total, 13 sub-districts declared a 7-day state of emergency.

Jamilah, a resident who lives downhill from the Angke river, saw her neighbourhood flood 2 metres.

“I returned to my home to gather some important documents, but I had lost everything I owned,” Jamilah, who like many Indonesians goes by one name, told VICE. 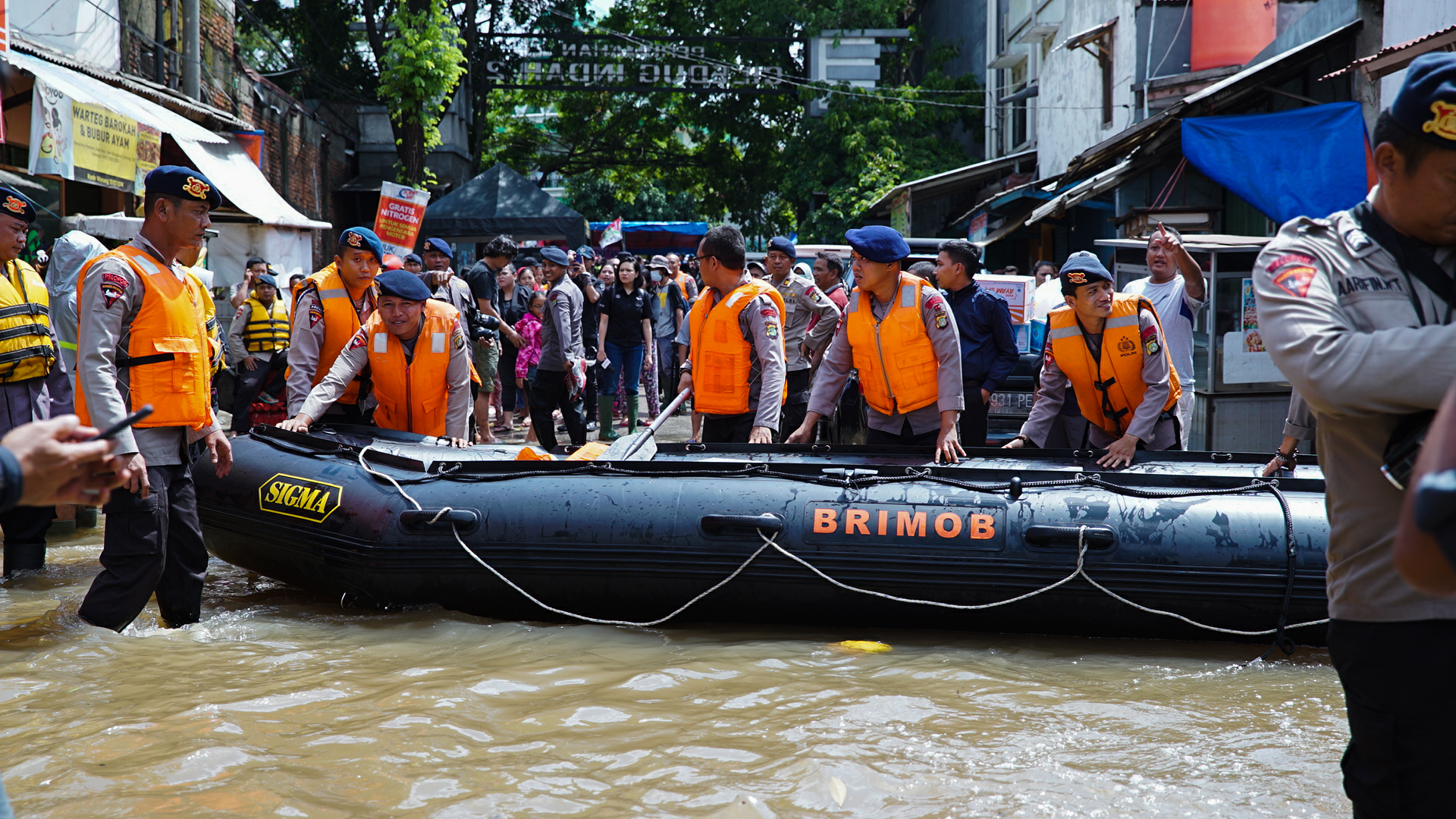 In the neighbourhood of Pondok Gede Permai, Bekasi, the flooding of the Cikeas river left a slippery layer of mud on nearly every visible surface. Before New Year’s Eve 2019, it had never flooded in this area.

In Bekasi, a city that borders East Jakarta, three rivers flooded simultaneously, resulting in floods between 70 and 400 centimetres.

At the time of writing, 92,261 people have evacuated the floods, while 60 have lost their lives in the disaster. The National Disaster Response Agency (BNPB) has recorded 103 flood points in the Jakarta metropolitan area, with South Jakarta having the most. 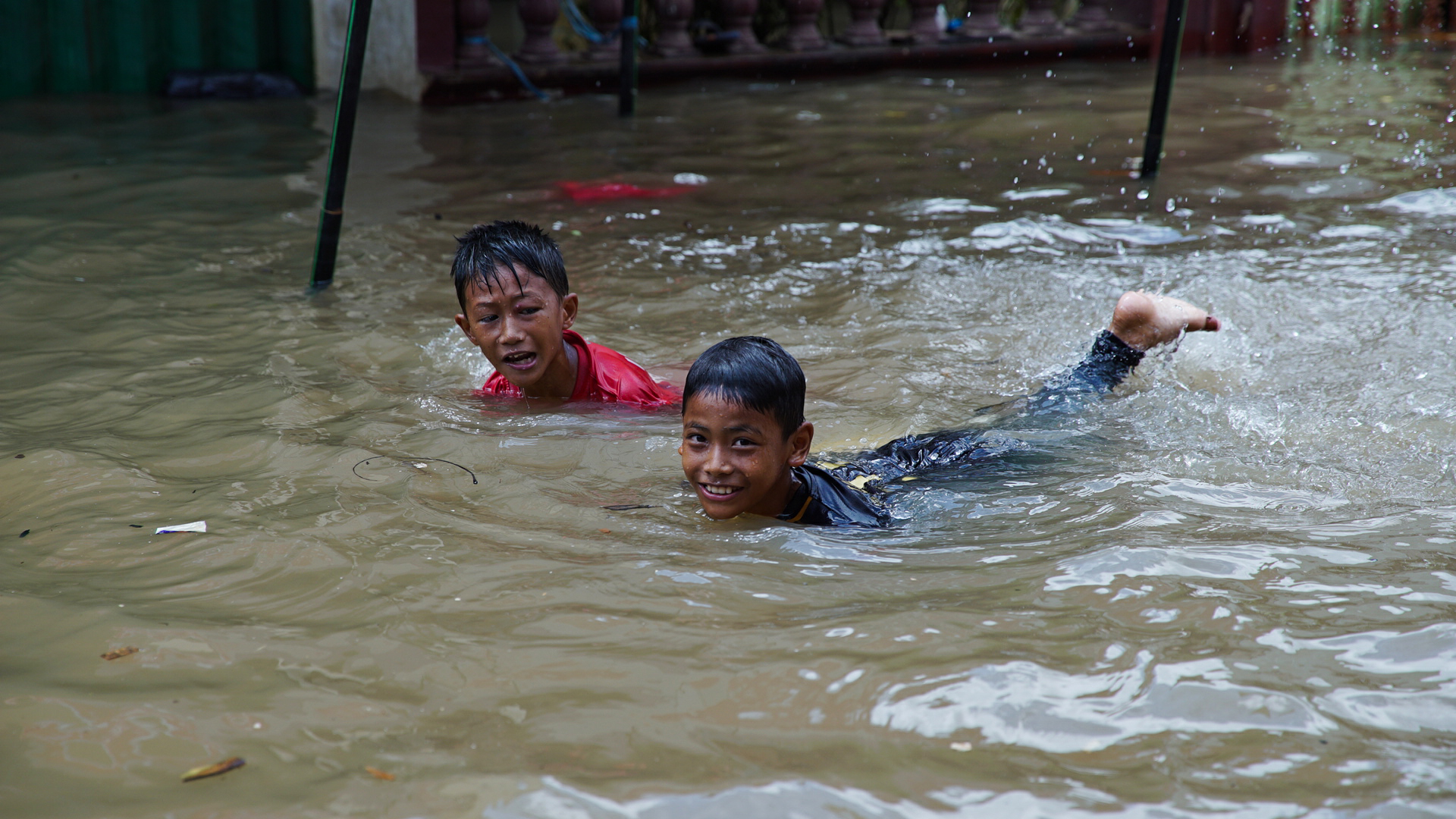 CHILDREN HAVE SOME FUN IN THE WATER IN CIPINANG.

Although Jakartans are accustomed to yearly floods, the scale of this year’s disaster took many by surprise. This prompted a closer look into how human activity, climate change, and urbanisation have contributed to the problem.

In addition to extreme weather events caused by climate change, the loss of green space to absorb water and pollution contributed significantly to the severity of the recent floods. Jakarta is left with few surfaces capable of absorbing water and littering is commonplace in Indonesia, resulting in clogged waterways and leading to water build-up in densely-populated areas.

The Indonesian Department of Meteorology, Climatology, and Geophysics (BMKG) reported 377 millimetres of rainfall per day on December 31, the highest rate of rainfall since 2007, when 340 millimetres fell per day. 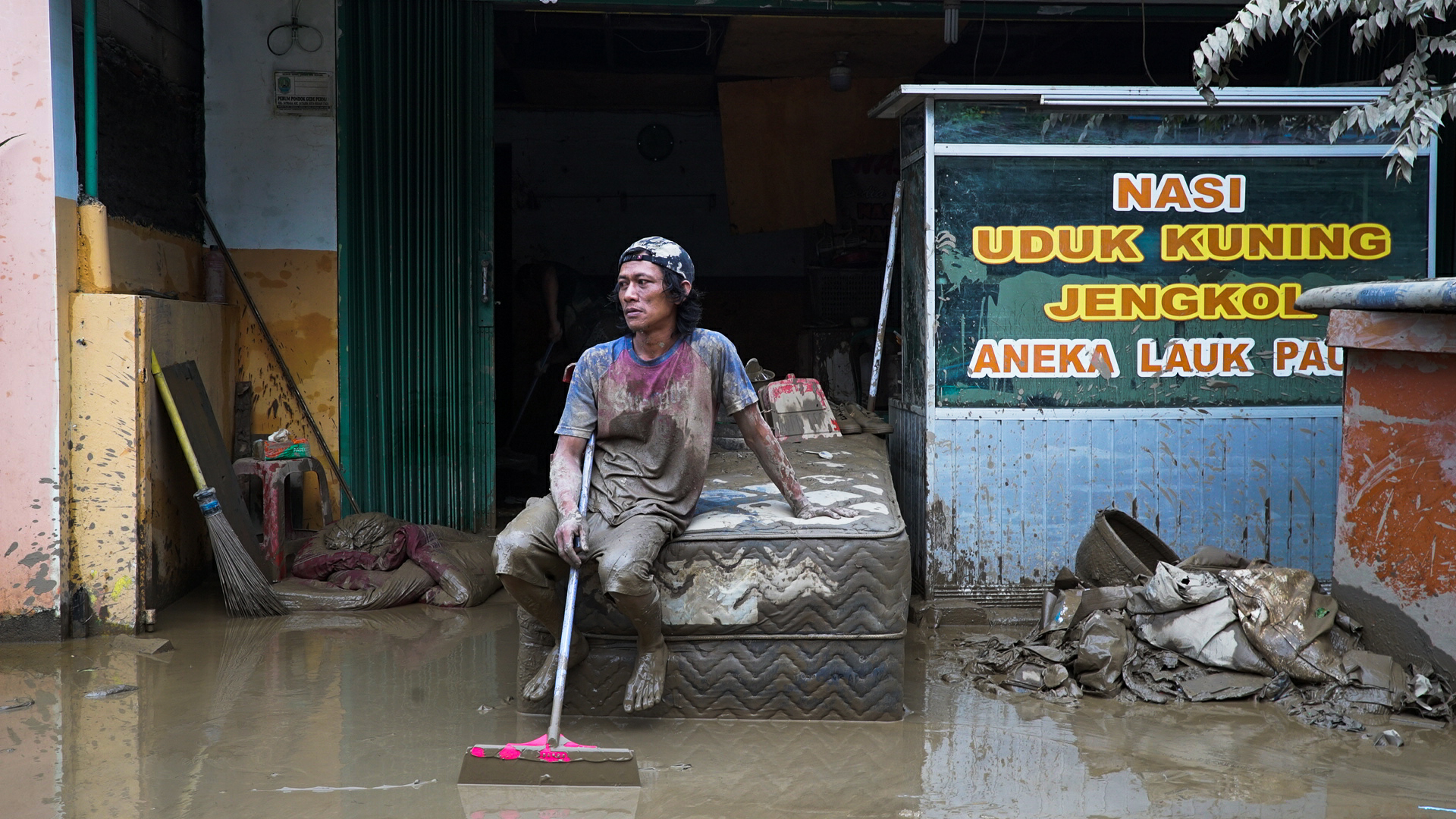 A LOCAL SITS IN FRONT OF HIS MUDDY SHOP IN PONDOK GEDE PERMAI, BEKASI.

The BMKG cited the monsoon — a change in wind direction marked by the rainy season — as one of the contributors to the flooding.

“Wind moving from Northeast Java mixes with wind from the south. This leads to the formation of massive clouds over the island of Java,” BMKG spokesperson Fachri Radjab said in a statement. 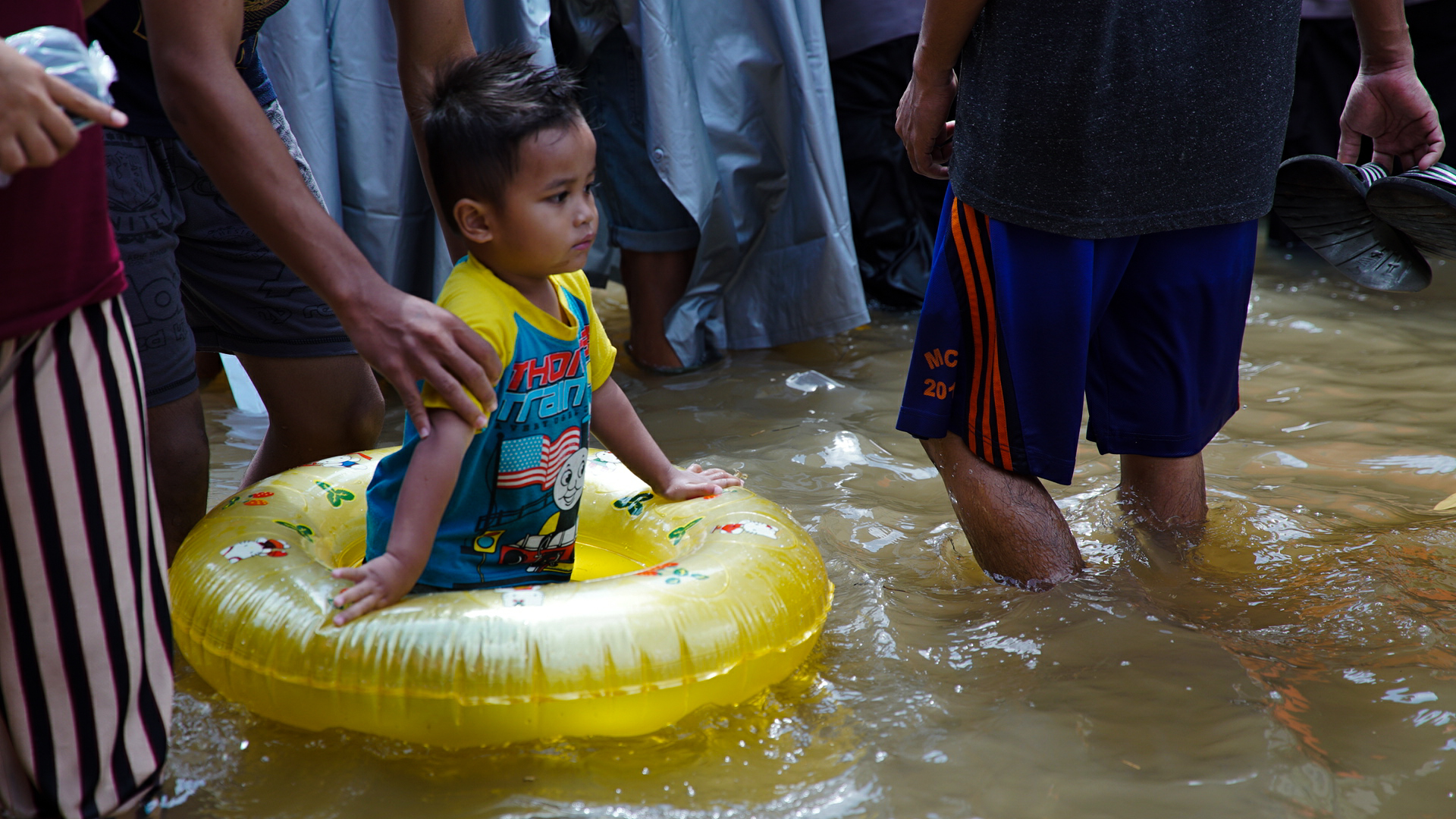 A CHILD PLAYS WITH A FLOATER IN THE FLOOD.

It has become increasingly clear that global warming is behind extreme weather events in Indonesia. Radjab added that a temperature rise in the Indian Ocean resulted in increased evaporation, which, in turn, led to the formation of thick rainclouds over Java. The BMKG predicts Jakarta will continue to experience heavy rainfall until the end of January.

“This intensification has implications for the risk of flooding as the climate warms, particularly for the world’s dry regions,” Donat wrote. 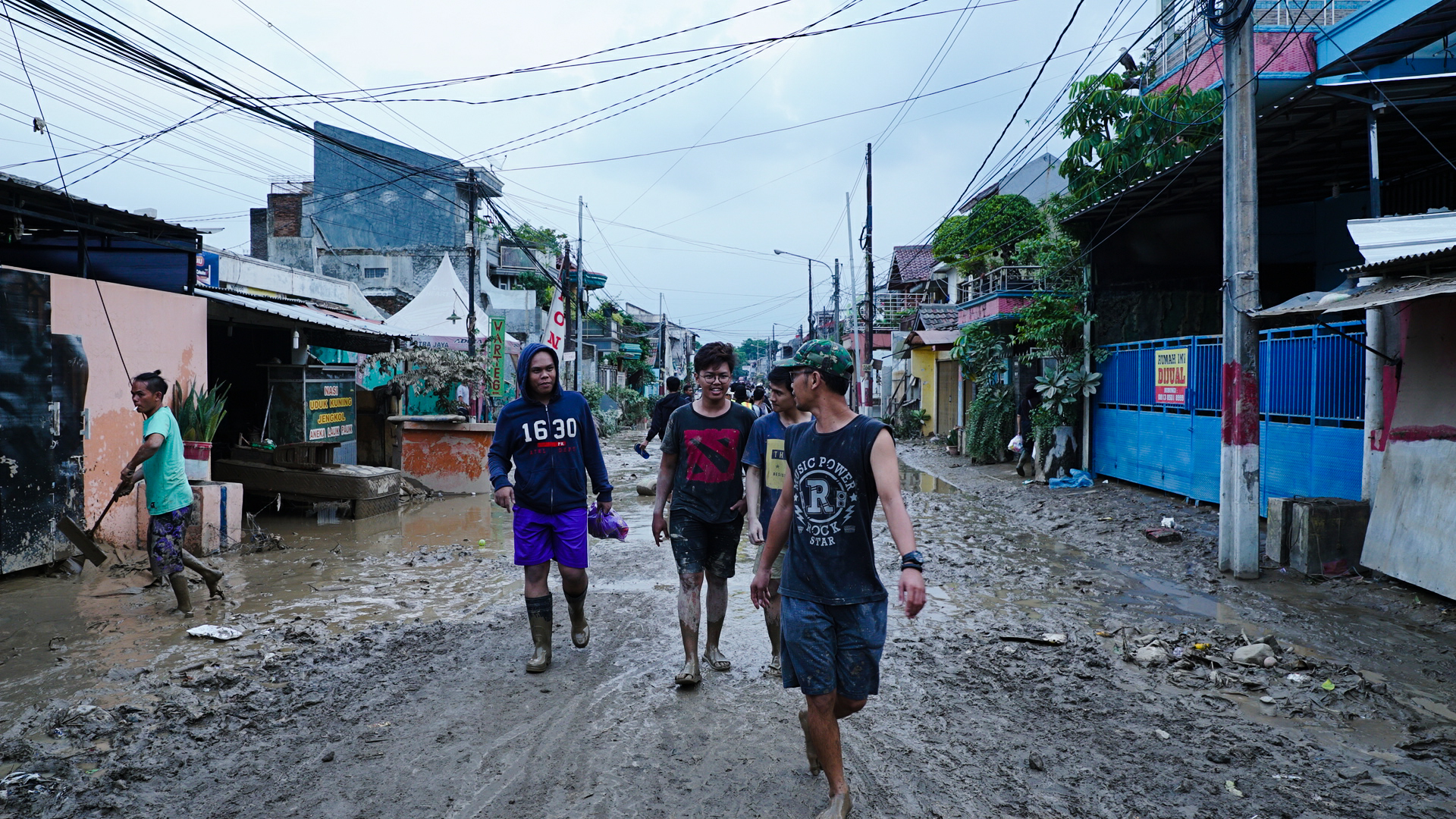 LOCALS WALK THROUGH THE AFTERMATH OF THE FLOODS IN PONDOK GEDE PERMAI, BEKASI.

A United Nations report on climate change found that 2019 was the hottest year in the past five years, indicating a 1.1 degree Celsius increase from pre-industrial levels and a 0.2 increase from 2015.

Countries including Indonesia promised in the 2015 Paris Agreement to limit long-term carbon emissions to 1.5 degrees celsius over pre-industrial levels, but according to researchers from the Global Carbon Project, global carbon emissions increased by 2 percent in 2018, when it totalled 37 billion tonnes.

Jakarta has long been a flood-prone area. Widespread floods during the reign of Dutch East India Company Governor-General Jan Pieterszoon Coen in 1621 even prompted the construction of three dams. 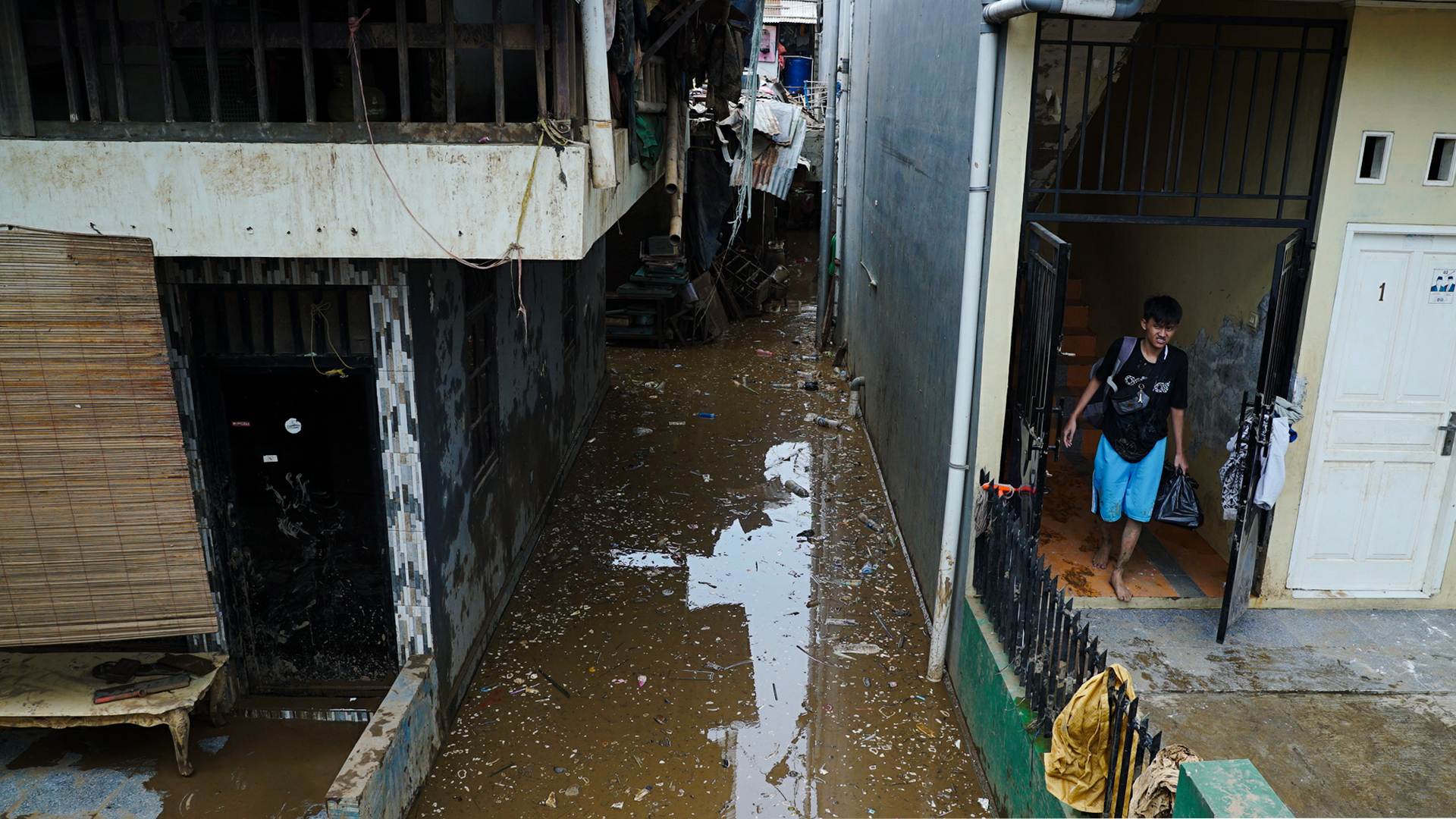 ALLEYWAYS IN KAMPUNG PULO WERE STILL FLOODED ON JANUARY 2.

And that’s not Jakarta’s only problem. It is also the fastest-sinking city in the world, which is largely caused by groundwater extraction in commercial and residential areas. It’s estimated that Jakarta is currently sinking at a rate of 25 centimetres per year, which can make flooding worse.

The efforts of Jakarta’s local government, or lack thereof, have failed its most vulnerable citizens. With little time left to mitigate the worst effects of climate change, millions of Jakartans are still waiting for the government to come up with a viable, long-term solution to the floods that destroy communities and claim lives. 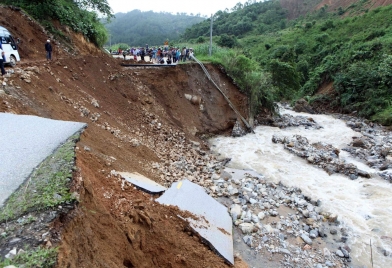 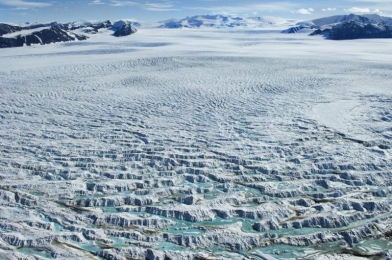 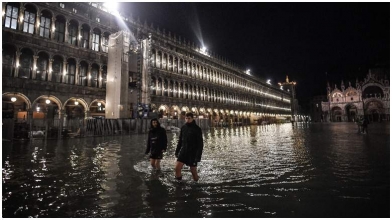