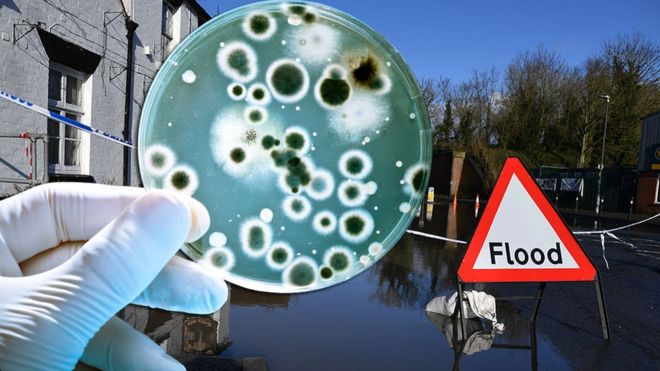 People who've been hit by floods in the UK have more to worry about than just the water damage done to their downstairs.

They probably don't need more bad news right now, but the water that's washed into their homes is full of really nasty bugs.

Flood water brings sewage up through the drains and muck from farms right into people's front rooms.

And needless to say, this stuff is full of bacteria and viruses that you really don't want to come into contact with.

"The main thing to remember is that the floodwater can be contaminated by silt, sewage, oil or chemicals," says Sanjay Jahal of UK charity the National Flood Forum.

"And some river water can carry things like Weil's disease."

Silt is the substance found in rivers that's smaller than sand, but not quite clay. Weil's disease, which is usually spread by animal urine, can be washed into rivers in rural communities.

'Don't splash about in flood water'

The list of things you can catch from raw sewage is long and deeply unpleasant.

Campylobacteriosis, encephalitis, poliomyelitis, leptospirosis are just some of the illnesses that humans can catch from raw sewage.

So understandably, Sanjay recommends people in flood hit areas keep as far away from the water as possible.

"Do not go into the water if you can help it especially if you've got children don't let them play in flood water, because obviously that can risk infections and potentially drowning," he says.

"Toys in the garden will need disinfecting and do not go splashing about in flood water.

The government says sandbags, after they've been soaked by flood water, need to be disposed of as hazardous waste and recommend people get in touch with the environmental health department to find out how to get rid of other belongings contaminated by chemicals or sewage.

"The other key thing as well is you don't know what's underneath your feet when the water is in," adds Sanjay.

"We've had reports of people falling down manholes and getting trapped and that's a drowning risk as well." 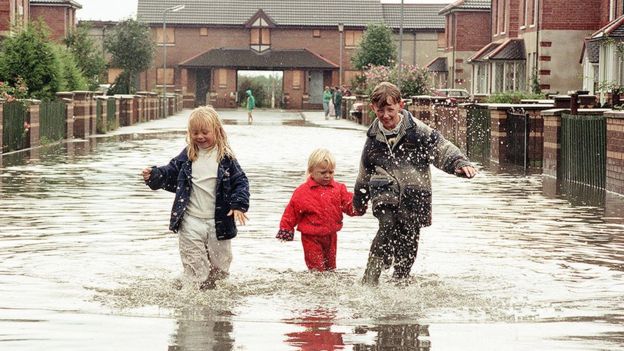 Advice from professionals is to absolutely never do this

And the dangers of all this water-born nastiness doesn't go away when the waters subside. As well as drying out homes, they'll need disinfecting.

"There will still be stuff left in the house. Things like silt and also potentially sewage," says Sanjay.

"The water company or the flood risk authority should come out and pour disinfectant if it's a big spill.

"But in certain cases they also do say if you leave it for 36 hours, approximately, those contaminants die out."

Another 10 days of "difficult conditions" have been forecast for parts of the midlands that have been by flooded.

And Prime Minister Boris Johnson has promised extra money will be "passported through" to parts of Wales that have been hit.